A débutante (from the French débutante, "female beginner") is a young lady from an aristocratic or upper class family who has reached the age of maturity, and as a new adult, is introduced to society at a formal "début" presentation. Originally, it meant the young woman was eligible to marry, and part of the purpose was to display her to eligible bachelors and their families with a view to marriage within a select upper class circle. Debutante balls originated in Europe, but take place all over the world. Some of the most ostentatious balls can be witnessed in the United States, specifically New Orleans.

Every fall before the carnival season, custom gowns are sewn, hair appointments are made, decorations are selected, and venues are booked for the debutante balls to take place the following spring. In New Orleans, debutante courts are traditionally presented during the carnival season, and are often affiliated with Mardi Gras Krewes (i.e. Rex, Osiris, Comus, Momus, Proteus, Profits of Persia) or organizations, but mainly affluent Caucasian families of the city . 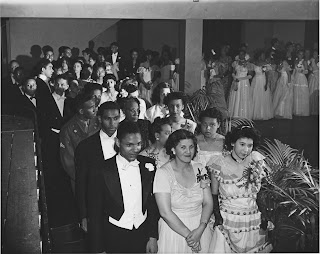 In the 19th century, middle-class Creole/African-Americans felt excluded from the Carnival spirit, so they formed their own organizations. The Original Illinois Club, one of the first African-American organizations of the city, held parties and community service projects. The Original Illinois Club was founded by Wiley J. Knight, who moved to New Orleans in 1894. He opened his own dance school at Cadiz near Camp Street where the sons and daughters of the best families attended his classes. From there, the idea for African-American debutante balls was formed.
During that time, Caucasian organizations traditionally emphasized family names and lineage, but the African-American organizations focused on accomplishment, putting emphasis on a young woman’s education and suitability for higher learning and the work force. Also, young African-American women aspiring to make their debut had to apply for the process, whereas young Caucasian women aspiring to make their debut were automatically accepted if their parents were members of the organization. 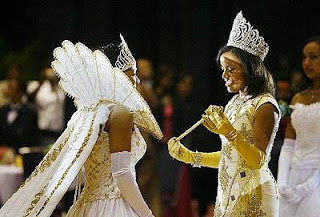 Today, African-American debutante balls are a major event in southern societies. Many young women make their debut with a National Panhellenic Council sorority, such as Alpha Kappa Alpha Sorority Incorporated, or Delta Sigma Theta Sorority Incorporated. Often times, the queen is chosen based on the amount of money she raises, and her fellow debutantes are crowned based on the amount of money they have raised as well. There is a debutante level, maid level, princess level, and the final level of queen. The debutantes spend a good part of the year leading up to the ball participating in bonding events and community service activities. Making your debut is an unforgettable experience, and is not only a formal way to be presented to society as a woman, but also a great way to build long-term friendships.
Posted by Malia at 2:46 PM