Jazz Funerals: The Mourning of Death, the Celebration of Life

The tradition of Jazz Funerals, as we know them today, has been around since the early 19th century. However, the concept and culture of playing the type of music that later on influenced Jazz in America at burials has been around for the past four centuries. The tradition started out amongst the Dahomeans of Benin and the Yoruba of Nigeria, beginning first as a primitive form of burial insurance where societies of tribesmen would would promise their members that they would have a proper burial once they died. In order to assure this, members would invest their resources, hence the early form of insurance. Then, when African slaves were taken to America, these societies became early social clubs and fraternities that dedicated their memberships to providing these burials. 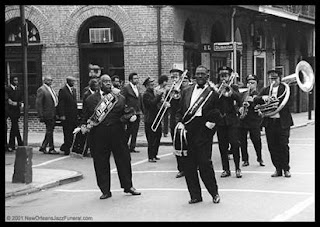 Music was eventually incorporated into the tradition based upon the African ideal of celebrating all life events that were significant and meaningful through music, which includes the final event of death. Around the 18th century, brass bands were becoming more and more popular, so as a result they would frequently be asked to be apart of funeral processions in New Orleans. During this time, most people who took part in these funerals preferred the term "funerals with jazz" instead of "Jazz Funeral", because they felt as if the latter title implied that the focus of the tradition was on the music, not the deceased. Yet, as brass funk started to become more popular, participants in the tradition began to warm up to the title of Jazz Funeral. However, many people during the mid-20th century still frowned on the use of this type of secular music during funerals, especially the Catholic church. The church felt as if this type of music disrespected the practice, so for a large amount of time the only people who typically performed these funerals were black protestants in New Orleans. During the 60s, this started to change along with the rest of the country due to civil rights and other prominent movements. 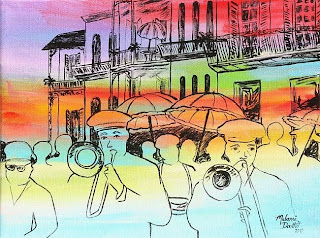 Jazz Funerals are usually held for prominent local musicians, important figures in the New Orleans community, Krewe members, or people connected to the New Orleans music industry. They begin as a procession from the home or funeral home of the deceased in which friends, family, and a brass band march to the burial site. On the way to the site, they usually play hymns and solemn music. Once the person is buried, however, the mourners say their goodbyes and the band begins to play more upbeat music (When the Saints Go Marching In is a very popular choice) as they second line around the area. As they do this, onlookers will usually join in on the second line to be included in the celebration of the deceased's life. 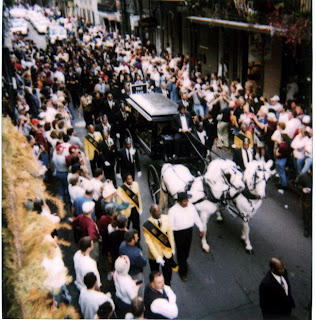 As Sidney Bechet, the famous New Orleans Jazz artist, once put it, "Music [in New Orleans] is as much a part of death as it is of life."
Posted by scottmaher at 2:22 PM